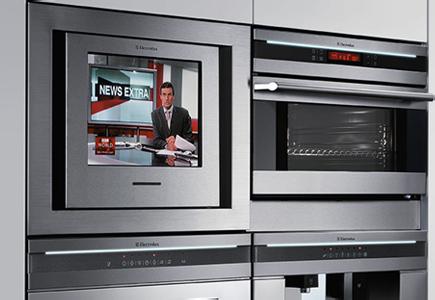 For years people have been sneaking televisions and radios into the kitchen to keep themselves company while they whipped up a meal. The downside to this was trying to create more space in the kitchen for items that had nothing to do with food preparation. Luckily, some kitchen entertainment products fit seamlessly into your design, and can be placed comfortably underneath cabinetry. Many manufacturers of traditional televisions now make under cabinet products; there are also under-the-counter apparatuses that can be purchased to mount televisions and other entertainment systems.

Here are two stand-out items that bring the entertainment without cluttering up your space.

iHome has always specialized in making functional iPod accessories (they were not responsible for the iPod-ready toilet paper dispenser), and they have recently applied their expertise to the kitchen. Their iH36 is a docking station and stereo designed to fit underneath cabinetry, keeping your iPod out of harms way while still filling your kitchen with tunes. The slim, horizontal iH36 can serve any size iPod or Shuffle and also features an FM radio and a cooking timer.

iCEBOX's FlipScreen multimedia center does more than simplify things in the kitchen, it can also entertain and inform. This model can be used as a television, FM radio player, and DVD player. But its best feature might be its ability to browse the Web, giving you the chance to look up recipes (or anything else), and giving others in the kitchen something to do besides bother the cook. The 12.1-inch LCD touch screen makes it easy to use, and it also comes with a remote control and keyboard. The design allows it to fit snugly underneath cabinetry, where its adjustable screen can remain hidden until you want to use it.

More in this category:« Smart Appliances