Making the Most of Surface Area 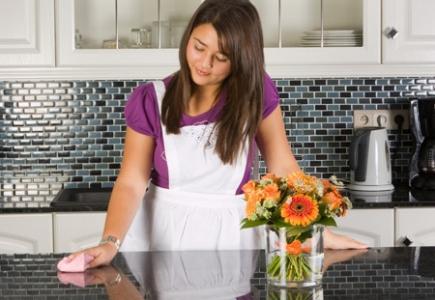 For serious cooks, a countertop that's easy to clean and care for is non-negotiable.

Too much counter space is never enough; but you can't always get what you want. What's most important is the surface area on either side of the cooktop. Chef Duncan Firth likes to keep the tools he needs for that particular meal on the left (he's left-handed), and set up his cutting board on the other side. When he had an island at home, he says, he used it mostly for storage, not for prep work.

Designer Clare Donohue says 2 feet of countertop ought to be enough for anyone. "Having worked in plenty of restaurant kitchens, I've seen the proof of what's needed; a line chef can crank out 100 covers in 24-inches of counter space, and that's all you really need."

However, chefs at home are tackling every step of meal, not just one part, so they typically desire more countertop space. It's especially important for frequent bakers or makers of pasta, who need the room to roll dough.

As with backsplashes, countertops in a chef's kitchen must be easy to clean.

"The fewer grout lines the better, the less maintenance the better," says Designer William Kent. "The more time it takes to clean, the less likely one is to make it a routine. The less one cleans, the more likely someone's going to have an unfortunate encounter with a bacterium. Slop happens in a a well-used kitchen. It just does."

Countertops in commercial kitchens typically consist of stainless steel. Some chefs like that at home; their spouses may or may not, which can be a deciding factor when choosing the material. Firth says he wouldn't want it at home because it can dent and it retains heat too well, offering the possibility of burns when you forget and put a hand down where a pan used to be. On the other hand, he doesn't like his own solid surface countertop because he says it doesn't take heat well enough.

As for whether or not you can cut on the suface, Firth just doesn't see the point. "The one thing that I always see when they're advertising a new surface is that you can cut on it. In a professional workplace, nobody cuts on the countertop," he explains. "It's the worst thing you can do for your knife."

More in this category:« A Stainless Steel BacksplashWell-Lit Workspace »